Last year, almost the entire global economy went downhill. I say almost, because American tech giants, gold, vaccine developers, and the Chinese economy are back on top. The market has divided into those who were pushed forward by the pandemic and those who were pushed over the sidelines, even temporarily.

Those who want not only to keep money under the mattress but also to put it into work, have come up with some questions. Are last year's stock growth champions still the same in 2021? Should investors invest in HYIP projects like telemedicine or cryptocurrency? Or should they pay attention to the sectors most affected by the lockdown, which, according to forecasts, should go up after the end of the crisis?

Let's start with FAANG - Facebook, Amazon, Apple, Netflix, Google. In early 2020, due to the lockdown, their stocks went down a bit but then showed decent growth. For example, Google stocks have jumped from $1,360 to $1,752 over the past year.

FAANG investors have made money, and I am sure they will succeed again in 2021. Although not everyone shares my confidence. For example, potential investors are deterred by claims from regulators that technology companies threaten global democracy. Among other doubts are the lawsuits against Google and Facebook, which allegedly agreed to divide the advertising market.

But, as it turns out, prosecutions and media hype are not diminished the giants' positions much. Today, their shares are close to 10-year highs. Google shares soared to a record high of $1,893 apiece. The new US president has pledged to tighten regulatory policy towards technology companies, but the numbers have not been affected. Perhaps because Joe Biden has no Senate majority. Investors understand that it will be extremely difficult for him to fulfill his promise to put pressure on FAANG.

I must say that if the news about the next litigation with technology leaders appeared in the media, then it had already played its role for the market. Insider information and corporations influence stocks significantly more than newspapers.

The PRC is the only leading economy in the world to avoid a recession in 2020 and has even shown growth. Moreover, it is accelerating. Analysts at Euler Hermes, one of the world's largest credit insurers, report that due to the crisis, China's GDP will be equal to the American one not in 2032, but in 2030.

I see no risk for the Chinese economy in the nearest future. This country has a crazy technical and technological advantage over the rest of the world. Look how many factories and manufacturing plants there are ready to produce literally everything. Nobody else has such an infrastructure.

In the future, the growth rate of the Chinese economy will decline. So, with a long-term strategy, it is worth paying attention to other promising regions, in which direction money will flow. These include Latin America, the Philippines, and Vietnam.

Last year, gold rose in price by a third, setting a historical record value of $2070 per ounce ($66 553 per kg). Now only investors are interested in metal. This always happens in times of crisis, gold rises in times of economic instability amid falling prices for major currencies. But as soon as the situation returns to normal, its demand will go down.

The world economy is emerging from the recession and the price of gold is gradually declining. Since August, when the record price was fixed, it has fallen in price to $1,848. As the economic situation improves, this price will go even lower.

On the other hand, there are optimists among analysts assessing the prospects of gold. For example, Bank of America believes that by the end of the year gold will rise to$ 3,000 per ounce. Analysts are taking into account the likelihood of a new wave of the pandemic. In addition, among their arguments is an increase in monetary stimulus from the US Federal Reserve. Gold is traditionally priced in US dollars and its value is usually inversely proportional. Therefore, as the U.S. dollar weakens, the price of gold should rise.

The Gartner consulting company predicts 4% growth for the IT market this year. Of course, this does not mean that any technological project will grow by default. I would bet not on pure IT, like software development, but on products that integrate IT into ordinary life. The adjective “smart” is most often used to describe such products: smart homes, smart cars, smart medicine. Or technologies in such industries that simply cannot exist without them, for example, esports.

I also follow the evolution of the e-commerce segment related to automation, AI analytics, and programs that simulate user behavior. For example, my focus is Alibaba. In October, company founder Jack Ma criticized financial regulators, prompting an antitrust investigation against the company. Despite this, I am considering investing in their shares.

Amazon has great prospects. It may seem strange, because the company is already breaking through the ceiling, and e-commerce is taking off all over the world. But if we look from the long-term perspective, this is only the initial stage of growth, and the companies still have everything ahead. Furthermore, Amazon has a lower stock-to-earnings ratio than Tesla, which looks like an asset bubble.

Intel is one of my longtime favorites. The last year cannot be called successful for the company. In July, shares slipped 20% after news of the postponement of 7nm chips to 2023. Competitors are nipping at the company’s heels with their processors. Despite all this, I have an inner sympathy for the way Intel does business. They emerged from various crises and, I think, will overcome the current one.

Telemedicine and virtual health have become the trends of the past year. They remain the highest medical topics today, along with vaccines. For example, Bill Gates, who once warned of the danger of a global pandemic, has already announced the need to create “mega-diagnostic platforms, which could test as much as 20% of the global population every week”.

Medicine will always be with us, getting ups in cases like the coronavirus. It will remain appealing for investments, and you can already witness distinct leaders in it. The classic option is to invest in them. Riskier is to look at each market and each project independently, what new companies are ready to bring, what services are still lacking, and what people will be willing to pay for.

The pandemic has hit the hardest in passenger traffic, tourism, and catering. Many analysts predict that as companies emerge from the recession, companies from these areas will recover faster than others, which means that investing in this area is the right decision.

On the one hand, now is a really good time for such investments, because you can buy shares in a downturn. On the other hand, you have not to mix up a temporarily fallen project with a really dead one. At the beginning of the 20th century, carriage workshops were also not very expensive, but this was hardly a signal for their purchase. Yes, some of them managed to turn into automobile enterprises. But most of them simply closed down.

The story of the passenger transportation market is similar. The airline business is bound to recover when the pandemic ends. But how many of these companies will survive, which states will support them and whether a new round of crisis will happen - these are questions to which there is no answer yet.

At the beginning of the year, Bitcoin set a new value record of $41,000. Naturally, many are thinking about investing in this and other crypto assets. Can the crypto market create some kind of multipliers? Sure! Could it, given the special attention of the US Securities and Exchange Commission, collapse to minimum values? It is also likely.

It is now impossible to predict how the situation with the crypto will develop. As with any high-risk asset, there are chances of both making good money and losing everything.

The cryptocurrency industry has a huge prospect, but I advise you to invest in this sector as much as you do not mind losing. We have seen more than once how the bitcoin grows rapidly, and then just as rapidly collapses by 500%. Therefore, if you are not a professional who understands what risk management is, entering and exiting a trade, it is better not to try your luck.

If you do decide to invest in crypto, there is only one surefire strategy: buy and hold. In my opinion, the meaning of the current bitcoin price is too high, so there is a wait for a correction. And you need to be patient. Such projects can only bring profit in 3-5 years. People who bought bitcoin at $19,000 in 2017 were called fools, and now they are able to come out with a double profit. Jumping in and out of a crypto train can be traumatic.

In July, the Verkhovna Rada adopted in the first reading Bill No. 3199 "On Amendments to the Law of Ukraine" On the Electricity Market ". This project aims at the sale of electricity to large investors at a preferential rate. If this Law is adopted, it will be possible to profitably build large data centers and mining farms in Ukraine. So far, everything depends on the decision of the lawmakers, but the prospect is quite clear - the state and the energy system also need this law.

Industrial cryptocurrency mining is a highly profitable business. For example, the total profit from Bitcoin mining today is $1.27 million per hour. So if you have a powerful mining farm and cheap electricity, you can make good money even taking into account the halving that took place on May 11, 2020, a planned halving of the reward to miners for a mined block in the Bitcoin blockchain.

Whatever sector of the economy you decide to invest in, never forget the main thing - for people who do not understand what they are doing, this game always ends badly. The statistics of, for example, the stock market are implacable: out of 10 investors, only one earns.

If you're just starting out, don't invest in something you’re not into. Often newbies make investments just feeling lucky. But if you don't understand the basic risk management tools in your chosen segment, you will never be out of luck.

Thousands of companies are listed on the market. There are IPOs every day. An investor is just the job as the rest. You need to learn how to do it, to learn how to make decisions on portfolio diversification. There are ETFs, funds that consolidate sets of shares. For people who are not ready to delve into development strategies and conduct a detailed analysis, such funds are the best and safest way to invest. 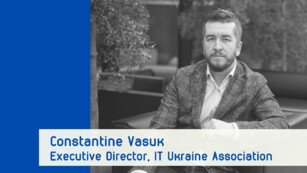 Constantine Vasuk, Executive Director of the IT Ukraine Association

The state brings benefits that we did not ask for

By the end of this week, the Council promises to register a full set of bills needed to launch a special legal regime for the IT industry - Action City.

How Ukrainian IT Company Delivers Value to Dutch Tech Businesses?

In the last two decades, we’ve helped more than 300 clients, 40% of which are Dutch, address tech talent shortage on their local markets.