Ukraine ranks first by three parameters: the number of players, the number of scored points and the number of created tasks. JavaScript remains the most popular programming language. These and other findings are based upon the Skillotron statistics platforms which are used to test skills of thousands of developers from 65 countries.

The most popular languages

The most popular programming language is JavaScript, and Skillotron’s statistics confirm this fact. In Ukraine, the popularity of JavaScript segment is twice as popular as the three following segments: .NET, QA General, and Java. For example, in Poland JavaScript is followed by Java, but with the same underrun from JS as in Ukraine. 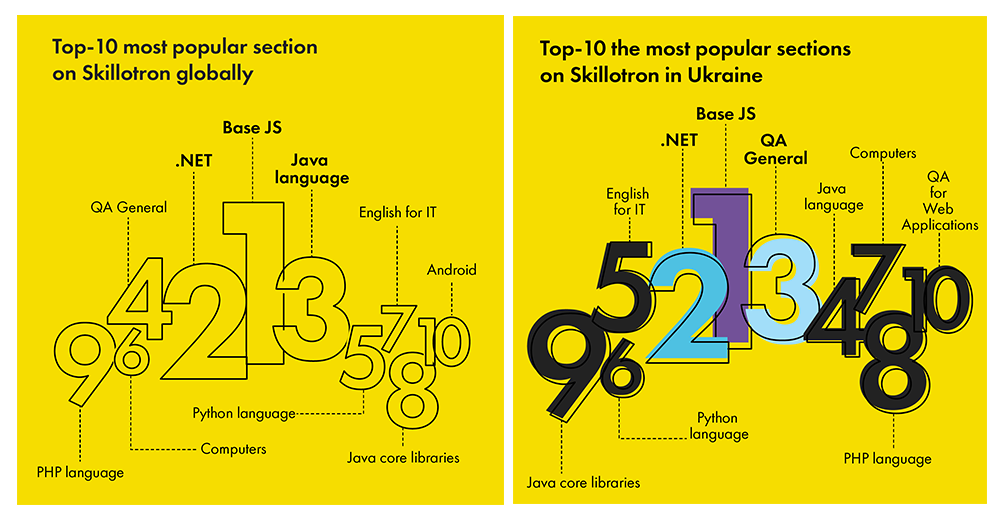 Ukrainian programmers rank first again in terms of points scored for tasks solution, Russia ranks second followed by Poland, Bulgaria, Belarus, the USA, Argentina and other countries.
In addition, Ukraine ranked first in terms of the number of tasks created by players for Skillotron: every second player not only solves offered tasks, but also adds his/her own questions to the system.
As for the diversity of technology knowledge, virtually all countries have shown a similar result: on average, one user passes 6 different parts of the platform.

Russian programmers are the fastest to solve tasks, they are followed by Argentina, Ukraine and Poland. The biggest amount of time to solve a task is required for Bulgarian programmers, but they are more persistent and pass more parts.

Skillotron is a community based gaming platform for IT-specialists. With its help you are able to check your technology understanding level, ask questions and compare your achievements with other participants.
The platform, launched about a year ago, unites over 11500 developers from 65 countries in the world. Skillotron has more than 2500 questions created by users. They are divided into 19 categories and dozens of subcategories: from programming languages to means of projects management and IT history.

The initiator and the main developer of the project is DataArt, a global technology consultancy that designs, develops and supports unique software solutions, helping clients take their businesses forward. Recognized for their deep domain expertise and superior technical talent, DataArt teams create new products and modernize complex legacy systems that affect technology transformation in select industries. DataArt has earned the trust of some of the world’s leading brands and most discerning clients, including Nasdaq, Travelport, Ocado, Betfair, Regus, Meetup and Apple Leisure Group among others. DataArt brings together expertise of over 2,500 professionals in 20 locations in the US, Europe, and Latin America.

SoftServe and Mikroelektronika will introduce an e-ticket in Lviv

On December 16, the Lviv City Council announced tender results for the e-ticket service development. The winner is the Czech-Ukrainian consortium of Mikroelektronika spol s r.o., and SoftServe - Municipal Technologies LLC

The Ukrainian branch of EPAM Systems, Inc. (NYSE: EPAM), is cooperating on a voluntary basis with Ukraine’s Ministry of Digital Transformation in the creation of a public services mobile application known as Diya, the first such application in Ukraine