On July 21, the National Bank of Ukraine has adjusted the official exchange rate of the hryvnia to the US dollar and fixed it at UAH/USD 36.5686. Thus, the NBU took a step towards supporting the IT industry and considered the proposals set out in the official appeal of the Association. According to the National Bank's estimates, the correction of the exchange rate will increase the inflow and, accordingly, the sale of foreign exchange earnings by exporters.

Taking into account the recommendations of experts, during a meeting with the management of the National Bank of Ukraine in May, the Council of Representatives of the "IT Ukraine" Association proposed to establish such an exchange rate regime that consider the interests of export industries and would allow a return to the floating rate in a short period of time.

We are grateful to the management of the NBU and our partners for the open dialogue and consolidated position of all stakeholders. We expect that the next logical step will be a return to the floating exchange rate, which will contribute to maintaining the stable operation of all export sectors of the economy, including the national IT industry,

Kostantin Vasyuk, the Executive Director of the "IT Ukraine" Association, stressed.

According to the latest data, the IT industry continues to generate foreign exchange earnings. Thus, during the three months of the War - March-May - the volume of export of computer services increased by 6% compared to the same period of the previous year. For the first In 5 months of 2022, the export IT industry provided USD 3.2 billion worth of foreign currency income to the Ukrainian economy. As of June 1, 2022, IT companies and private entrepreneurs working in the IT industry remitted taxes and fees in the amount of UAH 29.6 billion. - UAH 30 billion. The stable work of the IT industry allowed the IT sector to direct more than UAH 1 billion to humanitarian goals and to support of the Armed Forces of Ukraine.

At the same time, the IT industry is fighting on several fronts. 3% of specialists serve in the Armed Forces; approximately 12-15% is involved in the cyber front. All other people are about activities in the economic front.

Association "IT Ukraine" is the largest community of IT companies, which unites 118 members and more than 80,000 IT specialists. The association consolidates the interests of business, the government and international partners for the development of the IT industry in Ukraine, and also promotes the brand of Ukraine as a leading technological nation. 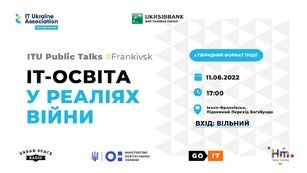 The second ITU Public talks #Frankivsk offline event took place in Ivano-Frankivsk with a live broadcast on the Association's Facebook page. The Spotlight of the event was IT education in the realities of the War. 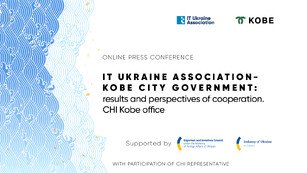 IT Ukraine - Kobe City: results and perspectives of cooperation

Effective cooperation of the IT Ukraine Association with the Government of Kobe city, Japan assisting by the Ministry of Foreign Affairs of Ukraine has resulted in the opening of Ukrainian IT company CHI Software office in Kobe. 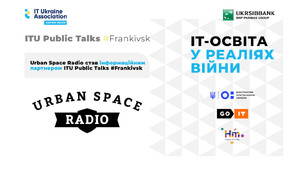 Recently, the Western Ukrainian representative offices of the IT Ukraine Association and UKRSIBBANK BNP Paribas Group launched a series of ITU Public talks #Frankivsk mentoring meetings aiming at developing the regional IT potential and its business capabilities in new realities 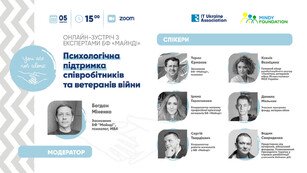 On August 5, an online meeting with the experts of Mindy Foundation dedicated to the topic of mental health support for employees and the War veterans was held.