August 16, the closing ceremony of CODE Summer School from the IT Ukraine Association and awarding of its participants took place in Kyiv iHUB. This year the project has significantly expanded – we received 212 applications (compared to 144 last year) for participation in the program, of which, based on the results of the tests, 130 children were selected. The geography of the project has also expanded – in 2018, children from 10 Ukrainian cities and villages took part in it. 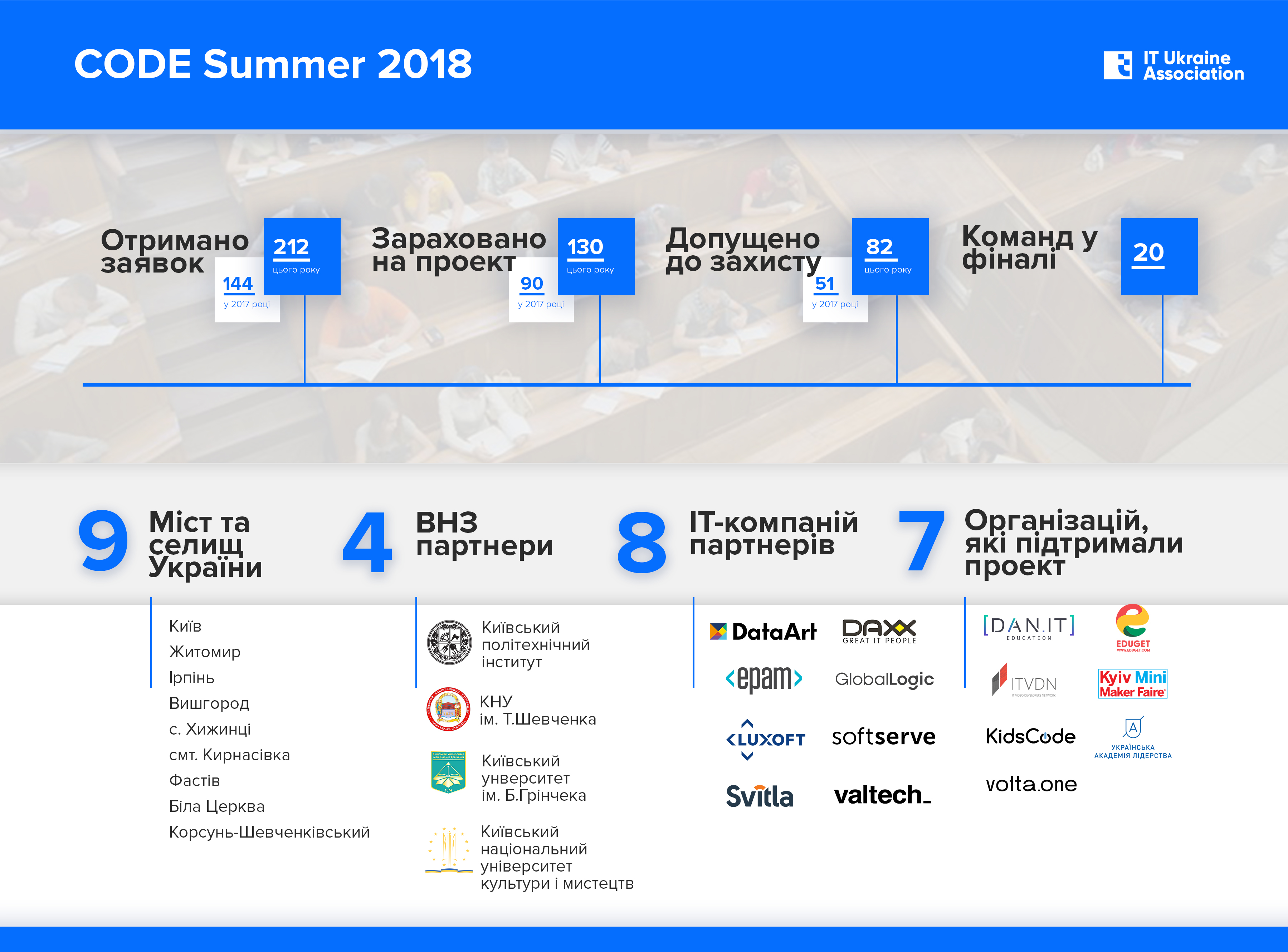 Last week, thrilled participants presented their team IT-projects to the jury and looked forward to results. Judges had difficulties distinguishing the winners since all works were worthy of awards. But finally, on the closing day of the project, the participants learned about the results of the competition.

Welcoming speech at the beginning of the ceremony took Galyna Lakusta, Operations Director of the IT Ukraine Association.

"There are three months of active training behind, and I can say that the first results of the participants' work are impressive. Children are already creating their own IT-projects that they demonstrated at the defense board on August 9th. This is a serious achievement for such a short period of time, which indicates the talent of the project participants. We really would like the children to be confident in their own strength and continue their education in order to join the industry once", – she said.

The enthusiasm of children was also noted by members of the jury and representatives of partner companies.

"I am pleased with the enthusiasm and commitment of the project participants. I would like to remind to children that the best investment is an investment in themselves. Spend your time and resources on self-development, upgrade of your professional skills, and be sure it will be useful to you on many occasions", – said a representative of SoftServe, a member of the jury Vadim Khalimovsky.

Thus, according to the results of the competition, the first place got the team of Fischuk Kyrylo and Malyarenko Mykyta, who had presented the Easy Pay project – a mobile service to pay for purchases and products in SAFs that do not have payment terminals. 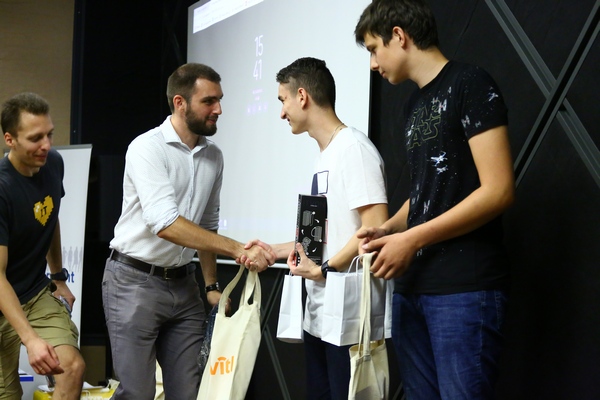 "Small business can't always afford a payment terminal that cost a lot, so their audience is limited with cash owners only. But with the help of Easy Pay, these entrepreneurs, having registered in our service and having received the corresponding QR-code, will be able to get paid for their goods virtually", – said Mykyta Malyarenko during the presentation.

The second place took Dmytro Kudrenko, Sofia Ryabokon, Bogdan Balik and Shishuk Oleksandr for creating the WorkSharp project - a web-service for organizing workflow and monitoring work tasks and projects between the customer and the IT-department.

"Work Sharp is a system that helps to structure the design, monitoring and management of IT-project. We now have four roles for system users - administrator, team-lead, customer and developer. A customer can create a project order, after which team-lead gets tied to it. He creates a technical specification for the developers and monitors the project creation process. Thus, it's easy to track all the discussions, comments and observations", – said Dmytro Kudrenko about his project. 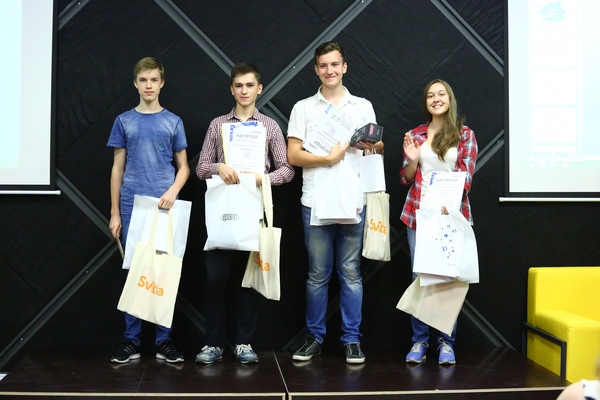 "Our project is a 3D game based on UNITY. Gaming models, locations, weapons, sound effects - this all was developed by ourselves. According to the plot, our hero falls into a parallel dimension, where he must fight ghosts and find the way home", – Sergiy Remez spoke about the project.

The winners, who took the second and third place, were awarded with pleasant and useful gifts from EPAM, SoftServe, Svitla Systems, Maker Fair, EDUGET and ITVDN. 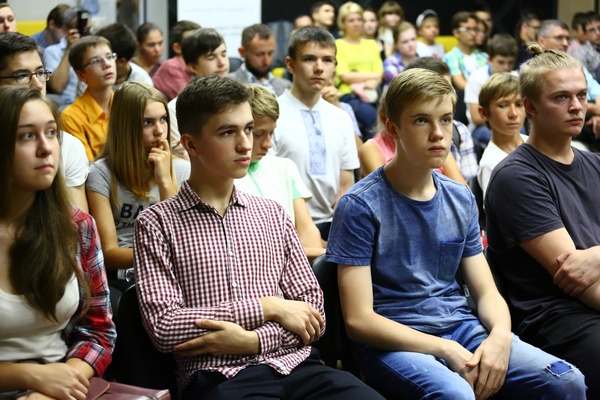 However, other CODE Summer School participants did not go empty-handed. Those projects that liked the individual companies that supported the project got personal prizes.

So, Vladislav Vakulenko and Degtyarenko Polina, developers of an application for recording information on the telephone conversations, Sino, received gifts from GlobalLogic and KidSoft.

A visual novel The Lucky Iron, developed by Roman Scutarovsky, Artem Grechko and Osama Cabrit, was featured with gifts from Valtech and KidSoft.

The site for social assistance Volonteer and its creators Sizov Vitalina, Rostislav and Anton were awarded with gifts from GlobalLogic.

Golik Fedor, Chernyakov Mykhailo and Oleksandr Shiluk were awarded for the creation of a 2D detective Crime Scene: Hotel by KidSoft.

The classic Snake game has made Valtech and Svitla Systems felt nostalgic, for which its author, Gerasimchuk Mykhailo, won the prize.

Trip calculator, a program for the calculation of time and money, spend on a trip, created by Maksym Gulevyi, Andriy Schwaika, Anna and Timofiy Shkandyuk, and Volodymyr Kobelev, was also spotted by SoftServe,

Ermolov Dmytro, the author of the program for calculating the cost of Picnic parties, has received prizes from EPAM and Valtech.

Kira Kryvenko, Ivan Pavlenko, Pavlo Matveev and Yevhen Tamarkin were awarded with prizes from Valtech for creating the Clever Bot.

"Now the biggest problem in Ukraine is a high-quality content for learning. ITVDN is a resource that generates such content. By now, the site has over 140 video courses for beginners and for specialists in the most popular and popular programming languages", – said Iryna Muzika, a representative of the company.

But not only the children were satisfied. Student mentors, who run children's projects, received free IT Weekend tickets and certificates from ITVDN.

We are also grateful to the Ministry of education of Ukraine, that supported the conduction of  CODE Summer.

All photos from the event are accessible via the link on our Facebook page by the link.

IT Ukraine partners the Ministry within the vaccination campaign

The parties agreed to cooperate in the vaccination of organized groups of IT specialists, which will be led by the IT Ukraine Association in July

The IT Export Boost project expands its geography to 21 countries

From the beginning it was about 14 countries, but later we received proposals from our embassies, which asked to include them in the project to promote the Ukrainian IT sector in the world

The Parliamentary Committee supported the tax part of Diia.City

The bill was introduced by people's deputies Chernev E.V., Hetmantsev D.O. and others, and adopted by the Verkhovna Rada of Ukraine on the basis on 15.04.2021

On May 12, at 15:00 will hold a seminar on "How to protect yourself from inspections by tax and law enforcement agencies."